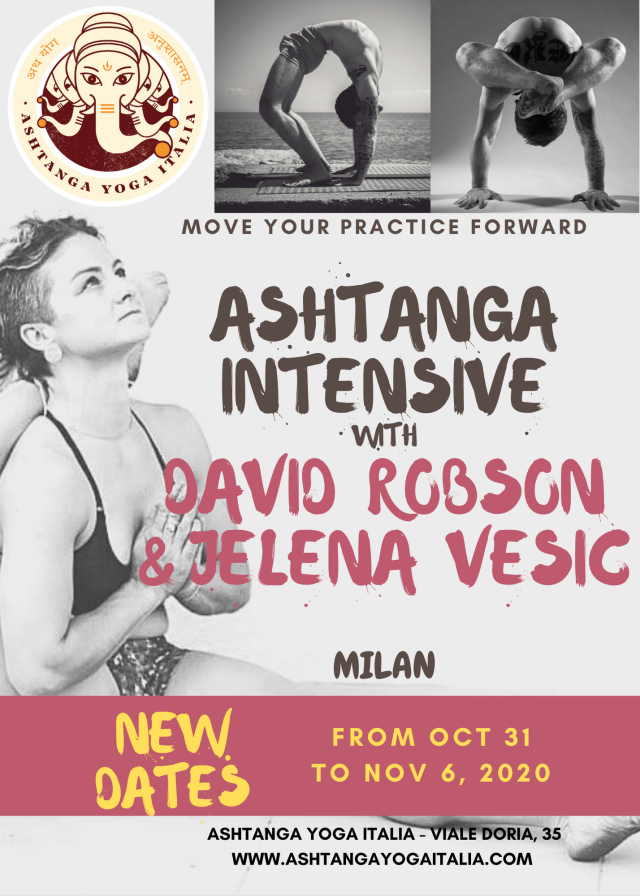 Ashtanga Yoga Italia is honoured to host in Milan, for the 4th time in 2 years, two of the most recognized Ashtanga Yoga teachers in the world: DAVID ROBSON, authorized level II teacher by KPJAYI (Mysore, India), together with his beloved wife JELENA VESIC. David has been practicing daily for the last 20 years and today he leads one of the world’s largest Mysore programs at Ashtanga Yoga Center of Toronto (Canada), of which he is the founder and the director.

* The time for the classes on Sunday, Monday and Tuesday is an estimate. The actual one will be set based on the actual number of partecipants and will be communicated closer to the event. Anyway, we’ll make sure that afternoons are free on those days and will make our best to accomodate people who will need to go to work on Monday after practice.

→ Mysore shifts will be communicated closer to the event.

David and Jelena will lead you through Ashtanga’s Primary Series with the traditional Sanskrit count, and include some detailed instructions along the way. Prepare to work very hard!

Mysore is the traditional format for practicing Ashtanga Yoga. Led classes are a fantastic way to learn about the vinyasa, but Mysore-style is where you follow your own breath and deepen your focus and meditation skills. David and Jelena lead one of the world’s largest mysore programs at their home studio, http://www.ashtangatoronto.com (Shifts will be communicated closer to the event).

workshop:  “SECRETS OF THE HIPS”

Arm Balances and Inversions turn the body upside down, and so they come with their own benefits and challenges. When practiced properly they can access dormant energy and potential in the mind and body. This workshop is all about learning the proper techniques that will help you be upside down.

Ashtanga’s Second Series of postures is designed to cleanse and charge our nervous system. This workshop will provide an accessible introduction to some of the deeper backbends, hip-openers and arm-balances that make the Intermediate Series such a transformative practice. All practitioners are invited to attend.

workshop: “BANDHAS & FORWARD FOLDS” – this workshop is open to ONLY 30 people. Book it at the soonest!

Ashtanga’s Primary Series is all about forward bends. While forward bends mights seem like simple postures, properly applying the special technique of Bandhas, internal locks, can make all the difference in your practice. This workshop will teach you how to optimize the work of each forward bend to find more safety and depth in your forward bend asanas.

David Robson is a practitioner and teacher of Ashtanga Yoga, in the tradition of KPJAYI. David is the director of the Ashtanga Yoga Centre of Toronto, where he leads one of the world’s largest Mysore programs outside of India.

David began a daily practice in 1998 while at university studying Comparative Religion. After graduating, he made his first trip to Mysore, India in 2002, where he initiated studies with his teacher Sharath Jois. Since then he has returned to Mysore annually to deepen and enrich his practice and teaching. In 2007, he was authorized to teach Ashtanga. Today David teaches workshops and retreats around the world. He has also released an influential series of instructional videos on Ashtanga called Learn To Float.

After studying ballet for 16 years, Jelena Robson made Yoga her sole focus in 2009. She has studied with her teacher, David Robson, since 2010, and is now leading the evening Mysore program at AYCT. She often assists David Robson on workshops and retreats in Toronto and around the world.

And if you can’t attend all morning classes:

To take part to the event it is necessary to get Anima Fenice ASD membership card for 2020 which is 25€ (for those who are not current members yet) and sign a medical liability waiver.

To register it is mandatory to send the following form filled in every part to ashtangayogaitalia@gmail.com telling precisely which session you’d like to attend.

Event: (specify if full event or which part)

Place and date of birth:

Tax or fiscal code: (if applicable)

Your slot is reserved only upon payment. Please, check with us the space availability BEFORE proceeding with the transfer.

Payments can be done cash or with bank transfer. For the latter, please make sure you cover the bank expenses/fees for the receiving side as well. If not sure about the bank fees, please add 15€ on top to your due amount.

→ Reason for the bank transfer if the membership is included: Membership + Robson workshop + Name and Surname of the person attending

→ Reason for the bank transfer if the membership is NOT included : Robson workshop + Name and Surname of the person attending

As soon as you do the bank transfer, please tell us sending an e-mail to: ashtangayogaitalia@gmail.com

The registration fee already paid is not refundable or transferable.

a project of ANIMA FENICE A.S.D.

(Entrance on the left of the main door. Downstairs on the right)