UTPLUTHIH and THE POWER OF BEING INTENSE

and the challenge to sustain Utpluthih for the loooooooooooong 10 counts made by Sharath!

It’s now exactly one month I’ve been practicing at K. Pattabhi Jois Ashtanga Yoga Institute in Mysore, and – as already happened on my earlier trips here – after one month I start feeling a difference in my practice compare to when I arrive. This time the difference is in my ability to enjoy my asanas compared to just one month ago when I found the practice so intense I just rushed through them so I could get to the end (I know, I know, this is not the point of asana practice but was the best I could do 🙂 ).

So this morning I had that feeling of presence in each posture till we got to… Padmasana! Sharath was counting 5 when I realized next posture would be Utplutih.

Well, for me it was like an alarm clock striking the time!

It was the time to gather all my energies in an attempt to stay up for all Sharath’s 10 countings that equal at least 30 of my breaths. Useless to say I have never been able to maintain it for such a long span… 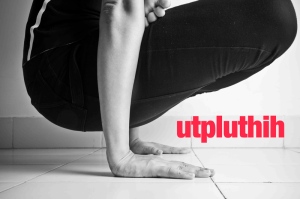 In just a few instants, I made a body screen of myself, found that my bandhas – or what my perception of them is – were loosen, the overall body was kind of relaxed, already ready for Savasana. Than I immediately brought the attention back to bandhas, expecially the mula bandha, trying to hold it as much as I could. As I did it I found a change in me: I felt taller, stronger… And so, when Sharath called Utpluthih, I felt ready.

Up on 1, to maintain it through the counting was kind of easy till 7 (I must add that I already tried to stay up for the full counting on Friday, but I had to come down on 7 😦 ). Believe that was because in some way I knew I had already done it and could do it again. But then the few seconds between 7 and 8 seemed to me way longer than just a few seconds!! In the meantime I was questioning silently to myself whether I should come down or not. I was almost letting it go when 8 was struck! I felt a new wave of energy, I knew that 10 was almost there and I could do it and… so it was!

I’m aware this can be perceived like an ‘ego attempt’ and I’ve been asking myself whether that’s what really is: an attempt to demonstrate (to me? to others?) I could be one of those that can make it. But while investigating this, I’ve reached a much more precious knowledge, conclusion, realisation, understanding… Asanas are not about how physically strong you are (though a healthy and strong body goes with) but more about how strong your mind is. And when I say that, I mean the ability to keep the mind focused, unwavering and at the same time not strained. Whenever we are able to do that, we can go beyond the limits we have built for ourselves!

They're more interesting than you think.

Some call it red
stand up, Arjuna!

beyond subtle reflection of the practice and discipline of yoga

...common stories about everyday's madness from the Indian Himalayas...